Since the bad news...

After they said the Preston Project would not carry any marks or contribute to the MA overall, it's fair to say the wind was quickly removed from my sails and set free. Harumph. Which is a shame because I was really starting to enjoy it. Still we've continued our meetings and settled on work to do. We settled on the working on the Preston Docks. I suggested something to go on the wave breakers and we seem to have gone with that.

I haven't been to the docks myself, but by all accounts I'm not missing much other than a run down looking waterway complete with dead birds. Considering how important the docks have been to Preston in its growth is amazing they don't make much more of them - especially as they are no longer used for trade, there is surely opportunity to create a living space or entertainment space or something there like other cities have don't with their docks. Someone in our meeting pointed out Salford Quays as an example - where that area has become incredibly desirable.

So, our design response will focus around a series of installations on the wavebreakers - much like the 4th plinth in Trafalgar Square that has different things put on. Everyone is contributing an idea for what could go on it. It's all being presented next week. I wonder if any groups will be 'brave' enough to refuse to take part? In artistic protest of course.
Posted by Stef at 17:01 1 comment:

I thought I'd share some of my sketches for my level design project I had.

It was a lot harder than I thought it would be when I started - I realised quite quickly that my first sketch of a level area was too open - someone playing it would be able to just wonder around aimlessly for ages and go where they needed to go which led me to change how I was designing it. 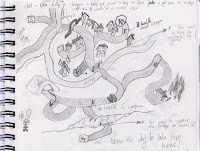 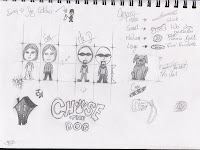 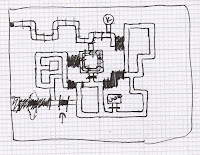 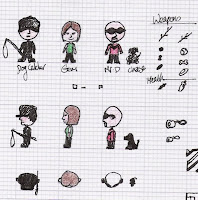 I'm pretty pleased with how it turned out. I was interesting to see how others had done it and to look at what the 1st years had done as well as their work was up on the walls. 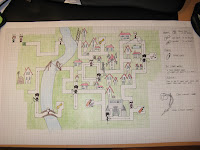 Volunteering to take minutes for our group meetings was a) a good thing as I enjoyed doing it b) a bad thing I as ended up with the most obscure item from the list to look in to/research. It turned out to be really interesting though. I had to look in to Temporal Rhythms of the city. Even though I had an idea of what temporal and rhythm mean, I had no idea at first where to start.

My first thought was the passage of time and its rhythm over time, since began. My first foray into the internet was met with page upon page with information about Temporal Rhythms of the brain…. Not quite what I wanted but I did learn a new fun fact: The Temporal area of the brain and skull is on the side of you head above your ears – so called because this is generally the first area that greys so showing the passage of time. :D Stef Bow: serving the public with useless bits of information since 1983!

But then I stumbled across a journal article that contained the term ‘Temporal Rhythms’ in reference to the ratio of time parents spend at work/with their children and how this varies with the seasons. This actually opened up my thinking to other rhythms or cycles including seasonal, night & day etc. Searching for ‘City Rhythms’ led me to a Wikipedia article that mentioned economy and religion.

Much better! I think studying the seasonal rhythms of a city is too long and term project for this one, but would be interesting – how the city changes visually through the year with the change in greenery and light and the volume of people making use of the outside areas and so on.

Daily rhythms would be interesting. The ebb and flow of people in and out and through Preston, the rhythms of different shops and businesses opening and closing, the different (yet constant) sources of light.

So, first week down and first work 'handed in'. Was an interesting experience to put my work on a wall and stand there with it! It appears teaching has come in handy for something - that is standing in front of people. I am slightly in awe of everyone else's work. Something to aim for I guess.

I have a project to do for next Thursday - Games Mechanics. I have to design a game level, mapped out on square/graph paper and use set games mechanics. I sat and started off doodling a layout. I think it's fair to say that I didn't really have any direction. (First attempt and lack of adventure games experience may be contributing to this!) Jim came and chatted and that helped - I think it flicked open a door so that I felt I was thinking a bit wider and it's making better progress now.

I think I rick going with the first idea I come up with - that age old panic to get things done kicks in rather than spending time changing, evolving and developing ideas. That's something I'll have to work on.